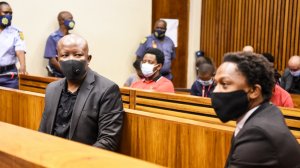 The State was forced to close its common assault case against Economic Freedom Fighters (EFF) leader Julius Malema and his co-accused, Member of Parliament Mbuyiseni Ndlozi, after its final witness was a no-show.

The pair are on trial for the alleged assault of Lieutenant-Colonel Johannes Venter during the burial of Winnie Madikizela-Mandela on 14 April 2018.

The case was scheduled to proceed on Friday in the Randburg Magistrate's Court.

However, the State was dealt another blow after the final witness, who they consulted with on Thursday, submitted a sick note on Friday.

The State subsequently made another application for a postponement which the defence vehemently opposed.

Advocate Laurence Hodes SC, on behalf of Malema and Ndlozi, said: "It is not the first or second time that this has occurred. On two previous occasions, the witness was absent from court. The witness does not intend to come to court, and we cannot be held ransom by the witness."

He argued that the delays and no-shows were prejudicing the accused.

"She has had two opportunities, and now this is the third time, there is clear prejudice," Hodes added.

Following a short adjournment, magistrate Leiland Poonsamy, in his ruling, stated that the court was in agreement that it's a common assault case and that it must be dealt with swiftly.

"The court finds that the two accused in the court have been prejudiced, and the court is refusing any further postponement in this regard," he ruled.

As a result, the State had to close its case.

The defence further indicated that it intended to apply for a Section 174 discharge of the accused.

An accused can lodge a discharge application in terms of Section 174 of the Criminal Procedure Act when the State closed its case, with the argument that there was not enough evidence before the court to link the accused to the charges.

The defence was expected to submit heads of arguments on 13 May in this regard. The State would follow with their submissions on 20 May.

Both parties had until 30 May to submit further comments.

The accused would return to court on 3 June for a decision on the application.

Do you want to live longer? Then, moving to Cape Town may be a good idea.  →