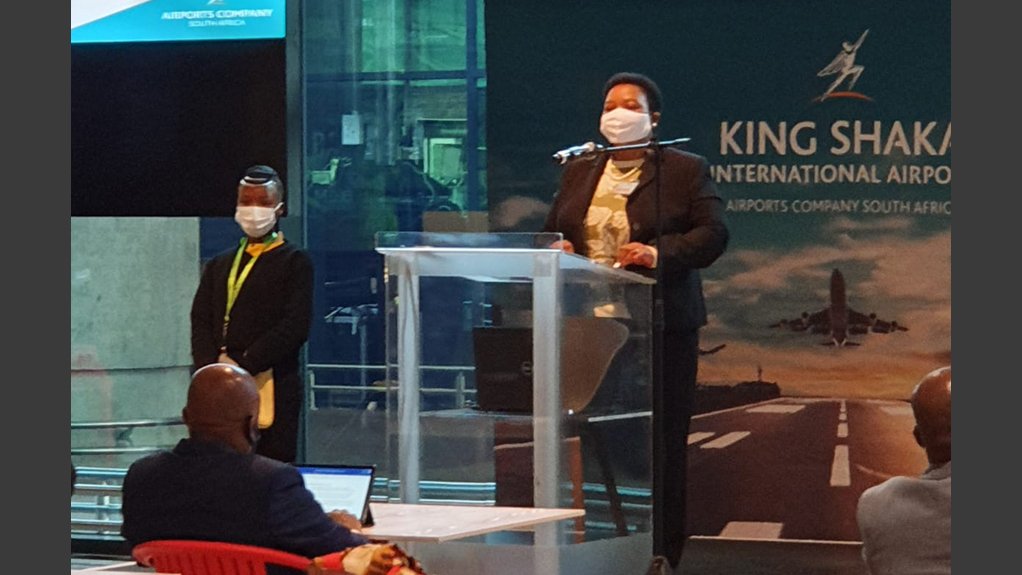 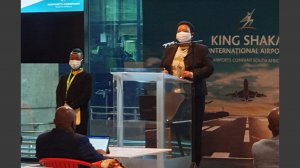 Premier of the Province of KwaZulu-Natal Sihle Zikalala;

Members of the Executive Council;

Director General of the Province Dr Mkhize, Heads of Department and all government employees;

General Manager of King Shaka International Airport Mr Dolemoney and All categories of staff at the Airport and ACSA;

Members of the Media Present;

Greetings to those who are following proceedings on social media;

We wish to thank the Management of King Shaka International Airport for this invitation.

Equally, we wish to thank the Premier and the all members of the executive council for setting aside time for this important inspection.

It is important to point out over the past 4 months, since the President announced the lockdown in March, we have been engaging experts, industry stakeholders representing different sectors of our economy.

We remain grateful for the ongoing engagement and their valuable inputs.

I have no doubt that this ongoing partnership between government and the private sector will help this province tide over the COVID-19 storm.

Ladies and Gentlemen, as we move forward, we are strengthening all our efforts aimed at reengineering our economy.

As we re redevelop and reconstruct our economy, the Aviation Sector remains critical.

Stats show that around February, air transport and tourism industries in SA supported a total of about 472 000 jobs and contributed about R180 billion to Gross Domestic Product each year.

Fast forward to the beginning of June, the International Air Transport Association (IATA) estimated that in SA 252 000 jobs were at risk. They further pointed out that the contribution of the aviation industry to the SA economy could be reduced to R97 billion.

Critically, we acknowledge the fact that before lockdown, King Shaka International Airport had served between 5 to 10 million passengers. This includes domestic and international travellers into the province.

Clearly, as the province, we acknowledge the fact that without the aviation industry, our economic recovery efforts will not yield positive results.

It is for these reasons that we are excited to be here this morning. We are here to witness how the airport has been operating since domestic travel was reopened weeks ago by the Transport Minister Fikile Mbalula.

In particular, we are interested to know how you have been adhering to the Standard Operating Procedures which was approved by the South African Civil Aviation Authority (SACAA).

As I conclude, we wish to formally congratulate management and all categories of staff at King Shaka International Airport for winning two important awards weeks ago.

Firstly – the Best Regional Airport in Africa and

We pay tribute to the Airports Company of South Africa under the leadership of Mpumi Mpofu. We do acknowledge the fact that King Shaka has won the award for two consecutive year.

We have been informed that King Shaka was amongst the 550 airports assessed around the world. Apparently, the World Airport Awards assesses customer service and facilities across the globe.

The survey and awards are independent of any airport control or input and are based on the World Airport Survey questionnaires. The questionnaires are completed by over 100 nationalities of airport customers during the six-month survey period.

I have no doubt that despite the challenges we are facing, the two awards will serve as an inspiration to the staff, stakeholders in the aviation industry and the tourism industry as a whole.

This country and this province in particular has over the years survived through challenges as a result of strong public-private partnership.

We have a responsibility to strengthen this partnership in order to ensure that together, we tide over the storm.

Address by by Charge d’Affaires Li Nan of the Chinese Embassy at the Food Parcels Donation Ceremony, Cullinan (29/06/20) 2020

We are greatly honored to be here to co-organize this donation ceremony with the ANC Women’s League.  →