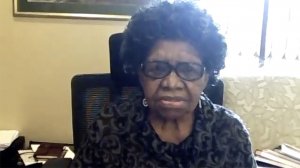 Born into privilege in the 1930s. At Crown Mines, Johannesburg, she grew up in a gated compound for the mining elite.

Yet she soon became aware of the harshness of the lives of the men in the barracks behind the fence.

At Fort Hare she studied under ZK Matthews. Politically active, she was detained as the 1976 revolt rocked South Africa.

‘A riveting account of activism, courage and values, all within a journey of conscious living’ – Zanele Mbeki

Joyce Piliso-Seroke is a teacher, a social scientist, a struggle veteran and a film maker, to name only a few of her many involvements. She is the recipient of the prestigious Father Trevor Huddleston’s ‘Naught for Your Comfort’ Award as well as  the National Order, The Order of the Baobab in Silver;  and the Order of Simon of Cyrene.