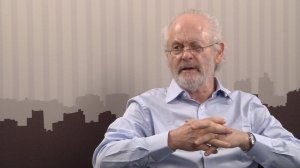 Researcher and analyst Professor Raymond Suttner speaks to Polity's Sane Dhlamini about transforming the masculine domain of the judiciary.