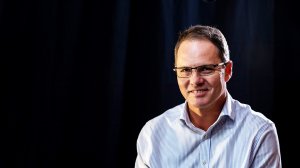 DRDGold, which recovers gold from tailings dams and mine dumps, presented an awesome set of cash-gushing and dividend-yielding financial results for the 12 months to June 30, a period that yielded R240-million for the government in the form of taxes and 5 424 kg of gold at a time when the gold price is soaring beyond the R1-million/kg mark.

“The line-up of tailings dams and old mine dumps from Roodepoort all the way through to Germiston is a reminder of our political legacy and the forced removal of people to beyond the horizon.

“The opportunity is here for us now, in collaboration with government, to remove this once and for all. I think it will bring about a lot of healing by not having that artificial barrier between the two parts of Johannesburg and also of not having that long commute,’ Pretorius told Mining Weekly. (Also watch attached Creamer Media video.)

Besides transport infrastructure, this land could be vital for new renewable energy infrastructure. Johannesburg could be surrounded by solar farms and battery energy storage plants.

During question time, Pretorius described the tailings dams in an around Johannesburg as an artificial barrier like the Berlin Wall  – “and it’s still there,” he lamented, pointing out its hugely negative impact on commuting cost and time to those who were forced to reside beyond it as part of the city’s racially segregated past.

“There’s a profound piece of political legacy in the landscape of Johannesburg,” he said, pointing to the tailings dams and the positioning of Soweto, the black townships and the historically enforced movement of people.

“That’s a stark reminder, not dissimilar to the Berlin Wall,” he said, pointing to enormous divided-society symbolism and the potential healing in removing the artificial barrier of a former segregated society and opening up vast areas for new-era residential development.

“Then, clearly, there’s the environment impact as well. Many of those tailings dams were built in low lying areas, in wetlands, and on the Far West, over the dolomitic aquifers, and they need to be removed in that regard as well.

“These are compelling reasons why there shouldn’t be tailings dams where they currently are and government should be falling over its feet to create an environment that is conducive to investing in the removal of those tailings,” said Pretorius.

Many people are living a lot closer to mine dumps than is appropriate. “We’ll remove all of them if given the assistance with capital infrastructure, if the taxation regime remains favourable, and if we’re given the scope of the regulatory dispensation.

“Very few things can contribute to the improvement of the quality of life in an around the Johannesburg area as much as the removal of all of its tailings dams can. It could be huge, it could be enormous, even if just the commute, for that matter.

“If these dams are removed, housing could be built closer to where the workplace is, which would be enormous. If commuters could save on their commute, mothers and fathers would be spending hours more with their families. Instead, they’re having to leave their children in the care of their grandmothers.

“What we would want to ask for is an enabling environment. Bring about the law and order. We’re spending an absolute fortune on preventing the theft of cables and pipelines. We’re spending a fortune on just keeping our people safe from attack. Make sure that the tax environment remains favourable so that we can invest capital and recover that capital in the way that we do now. Don’t bring about silly changes that will make it harder for us to do that because the downside is that the dumps will just stay there.

“To set up something with big enough capacity to do this, takes a long time and costs an absolute fortune. We’re very fortunate in the sense that we’ve developed the whole model over decades and we have extensive infrastructure. With that, we also have a team of operators that has the skills set to do this in a sustainable way. What we’re saying is that it won’t cost you a cent. Just create an environment in which we could build this and not have to worry about it being carried away, not having to worry about our people getting attacked, and we’ll take care of the business of removing the dumps,” said Pretorius.

DRDGold’s revenue in the 12 months to June 30 soared by 52% to R4 185-million on higher gold production and gold sold, together with an extraordinary 33% rise in the average rand gold price received to R768 675/kg.

On securing lower-cost green funding and promoting environmental, social and governance (ESG) principles and sustainable development, Pretorius told Mining Weekly: “There are lots of funds that are looking at ways and means of investing in this because it has meaning and purpose and ESG makes good business sense.

“DRDGold has been around for 120 to 130 years and there’s no reason why it can’t be around for another 30 to 40 odd years in cleaning up all of these mine dumps in and around the Johannesburg area and also further west. It’s a good contribution and I think it’s going to make a real difference,” he said.

A near-term plan that DRDGold management hopes to take to the board, if not in October, at the very latest in February, is power storage in the form of the modular stacking of batteries and photovoltaic (PV) top-up.

“What it basically boils down to is the charging of batteries during off-peak tariff hours of the day and the discharging of those batteries during peak hours. It also acts as a power backup and smooths the flow of current. At the moment surges and dips are a big problem. That’s had an impact on just the life of instrumentation and other sensitive equipment.

“Ultimately, the idea is also to top this up with some PV capacity to do a lot of charging of the batteries off solar power, and that’s in the longer term. In this way you don't have to spend hundreds of millions upfront in order to generate your own power. There are companies that are designed to do this and you could become a client,” Pretorius said.

Ten killed in inter-communal violence amid protests in eastern Congo

Ten people have been killed and 34 injured in fighting between rival ethnic communities in the Democratic Republic of Congo's eastern city of Goma, a spokesperson for the provincial government said on Tuesday. The clashes broke out when protests against the UN's MONUSCO peacekeeping mission, which some blame for failing to end to worsening insecurity and militia attacks, descended into violence between the two communities. →