‘I support the idea of free education’ - Jonathan Jansen 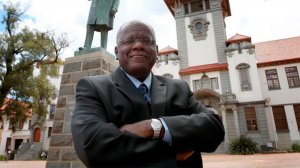 University of the Free State Vice-Chancellor Professor Jonathan Jansen speaking at a luncheon in Johannesburg, organised by the American Chamber of Commerce in South Africa. Video and editing: Darlene Creamer 4.08.2016

University of the Free State Vice-Chancellor Professor Jonathan Jansen said on Thursday that while he supported the idea of free education for poor students, he deplored the burning down of universities.

He was speaking at a luncheon in Johannesburg, organised by the American Chamber of Commerce in South Africa as a farewell to him before he stepped down from his post at the end of August to take up an invitation as a Fellow at the Centre for Advanced Studies at Stanford University in the US.

Jansen said he believed that poor students deserved the right to free education but was completely against the idea of destruction to get free education.

He pointed out that throughout his seven-year term as vice-chancellor he had not sent home a poor student because they did not have tuition fees.

“South Africa is in a perfect storm because for the past 15 years the government has underfunded higher education and pushed up the fees every year. I am worried because I don’t see everybody worried. If your schools don’t work, then your universities won’t work, as well as the economy,” Jansen added.

He said President Jacob Zuma’s call for a zero per cent university fee increase for the next two years was catastrophic and called on businesses to approach government and engage with them on how they could help fund education.

“Our universities are going down, one by one. A country without higher education loses respect. I feel good when I am walking around the campus. It gives you a sense of hope. We have an obligation to fund the students that are poor,” he said.

The top professors in South Africa were leaving which was worrying, he added.