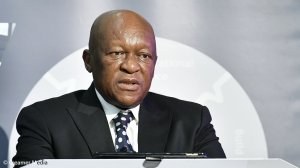 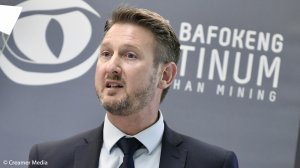 RBPlat CEO Steve Phiri told a half-year results presentation, highlighted by hugely turned-around earnings and flowing cash, that both the Bafokeng Rasimone Platinum Mine (BRPM) and ramping-up Styldrift operation delivered strong performances and go into the second half with 172 000 t already on surface, made up primarily of Merenksy reef from Styldrift. (Also watch attached Creamer Media video.)

In addition, the rhodium market is in deficit and the strong average basket price that RBPlat received during the first half was driven by the rhodium price and rand weakness.

Moreover, the current market favours the palladium-and-rhodium-leaning UG2 basket and 60% of RBPlats’ first-half revenue was attributable to palladium and rhodium.

The stockpile created a R229-million inventory at the half-year, which is expected to be built up slightly further by strong mine performance, plus a general build-up of additional working capital.

“Barring unforeseen circumstances, we’re positioned to return free cash to the shareholders this year,” said Phiri, “And that’s a very important message coming at a time of a project as big as Styldrift”, on which more than R13-billion has been spent.

“We pleaded for understanding and patience as we navigated the bumpy road. We’ve never been in doubt, though, that we’d succeed in achieving what shareholders enjoined us to do.

“We must express our gratitude to the shareholders for according us that understanding, patience and confidence, which at one stage were waning. Thank you appreciatively for that. We do not take that confidence for granted. We’re very excited and encouraged by the progress we’re seeing, but certainly not complacent,” said Phiri during the presentation covered by Mining Weekly.

As was expected, BRPM continued to transition towards greater volumes of UG2, with 32% of production coming from UG2, which has a higher palladium and rhodium yield.

RBPlat’s basket price of R43 681 per PGM ounce for the half was 77% higher than for the same period a year ago. Half-year revenue rose 45.6% to R4.6-billion on the strong PGMs basket price.

After a period of relatively subdued demand, the market began to improve last year. In spite of Covid, a robust palladium and rhodium market continued through the first half of 2020.

“Market predictions are difficult to assess at the moment because both supply and demand are affected by the environment, unusually so,” said Phiri, who expects things to be bumpy but manageable as South Africa heads towards the expected peak of the pandemic.

Global refined platinum production is predicted to decrease by 14% this year to 5.3-million ounces, with South African mine output expected to be 17% lower at 3.7-million ounces.

“Although it is unclear how the pandemic will ultimately play out, current indications are that platinum and palladium will be close to balance and rhodium will remain in deficit for 2020,” said Phiri.

Demand for platinum and palladium is expected to be lower this year, aligned with lower supply.

The early recovery of China relative to Europe and North America supports a faster recovery in PGMs demand.

At the same time, diesel hybrid cars have bucked the trend in Europe by sales going up, particularly in the UK by 211% in the first half of the year to more than 21 000 units. Hybrid sales rose by 55% in Germany and by 44% in Spain.

“The last six months, since we presented full-year 2019 results in March, has certainly been unprecedented, to say the least,” said RBPlat CFO Hanre Rossouw.

“I stood before you then proclaiming the benefits of a Royal Bafokeng and I hope to share with you now how this assisted us in facing the challenges brought about by the Covid pandemic.

“The summary of our financial results of the period shows a strong performance, despite the impact of the pandemic, with record six-month financial performance on all major metrics.

“We posted a revenue of R4.6-billion for the period, an increase of 45.6% year-on-year, with a stronger pricing environment offset by the 12.9% reduction in sales volume. With significant costs still incurred during the lockdown period, the cost of sales increased by 8.7%.

“Other income increased 286% to R435.7-million, assisted by increased royalties received from Impala 6 Shaft and 20 Shaft operations, and a R343-million foreign exchange revaluation of our pipeline,” said Rossouw, who added that this was offset by the reversal of a R70-million foreign exchange gain booked on a currency hedge for the gold streaming transaction with Triple Flag.

The Maseve tailings dam has been completed, with all key construction works allowing tailings deposition and the expansion extending the life of the facility by an additional 13 years.

Covid-delayed construction of BRPM’s tailings dam expansion is still expected to be completed in the fourth quarter of 2021.

Capital expenditure for the period under review was R780-million, reflecting an increase of R159-million, or 25.6%, over last year’s comparative period.

The completion date for the Maseve MF2 concentrator upgrade has been extended out to May 2021 as a consequence of key manufacturing and procurement processes, especially items being made in Europe, being Covid-delayed.

During the first half of the year, one of RBPlat’s employees succumbed to the coronavirus, and just under 500 tested Covid positive. More than 1 800 tests were conducted and the recovery rate has been high, with just over 100 cases still active

To alleviate pressure on State resources, RBPlat converted its Maseve mine’s South Shaft change house into a 200-bed hospital, the R10-million Royal Bafokeng Platinum Field Hospital, which was handed over to the North West provincial Department of Health on July 1.

RBPlat also has a contractual agreement in place with a nearby hotel to use it as its quarantine and isolation facility for up to 100 employees and community members, who cannot quarantine or isolate at home.

RBPlat implemented measures designed to manage the impact and spread of the virus by continuing its operations within the broader national guidelines, as well as its own health and safety framework, while also limiting the economic impact in communities by pledging an initial R3-million to support much needed community projects.

A midtier PGMs producer, RBPlat originated from a joint venture between Anglo American Platinum and Royal Bafokeng Holdings, with RBPlat becoming the 100% owner of its business two years ago.

RBPlat mines PGMs in the Merensky and UG2 reefs on the Boschkoppie, Styldrift and Frischgewaagd farms in the Rustenburg area, which have been identified as hosting the last undeveloped Merensky reef on the western limb of the Bushveld complex.