EFF calls for postponement of elections until 2024

EFF calls for postponement of elections until 2024 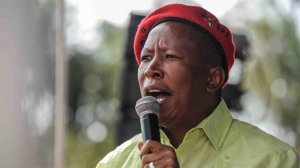 The Economic Freedom Fighters (EFF) called for all elections, including the local government elections, to be postponed until 2024, saying the country lacked technical capacity and moral integrity.

EFF leader Julius Malema led a media briefing on Thursday in Johannesburg, where he explained that running the elections during the pandemic would constitute an undermining of democracy, as well as put lives at risk, as elections could be regarded as a super spreader event.

He further noted that with lockdown regulations in place until February, efforts to procure the vaccine for the majority of the population was still in a phase of uncertainty.

“As things stand, Covid-19 has made all of our lives unpredictable, a situation which undermines each and every political party’s ability to engage with voters, due to fear of participating in the massive spread of the virus,” he said.

Malema held that free and fair elections must be based on the ability to conduct an open campaign, engaging prospective votes and preparing election machinery in a stable political environment.

“The adoption of this proposal will streamline elections and ensure that public representatives and political parties focus on the mandate of service delivery, and do not exist in a permanent state of elections,” he added.

Meanwhile, Malema condemned unscientific and nonsensical conspiracy theories that seek to suggest that vaccines are part of an agenda for population control, explaining that vaccinations played a critical role in eradicating disease throughout various epochs in the history of humanity.

He said it was not only unscientific but also illogical, as the majority of the population consumed various forms of Western medicine without any fear of a depopulation agenda.

He urged big pharmaceutical industries to shy away from “suspicious activities” such as overpricing of critical medication, which he said leads to racial and economic discrimination.

He also discouraged them from instituting non-disclosure agreements with governments.

The EFF called for a patent waiver on all vaccines to ensure internal mass production of vaccines to suit Africa's needs.

With the new Covid-19 variant been identified as being highly infectious, and more present in the youth, the EFF called for the postponement of the reopening of all schools.

Furthermore, he called for the closure of Parliament, Legislatures and Councils, and suggested that all legislative activity be conducted online.