DWS: Water and Sanitation collaborates with stakeholders to clean Luvuvhu and Mutshindudi rivers in Limpopo 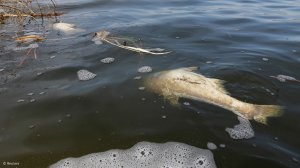 Department of Water and Sanitation collaborates with stakeholders to clean Luvuvhu and Mutshindudi rivers in Limpopo Officials of the Department of Water and Sanitation collaborated with 300 volunteers from the Luvhuvu community, civil society, Capricorn FM and students from the University of Venda among others, to clean Luvhuvu and Mutshundudi rives in Limpopo yesterday as part of its Clear River Campaign to mark the Mandela Month.

The campaign is the initiative of the department which aims to highlight awareness of pollution-free freshwater ecosystems and environmentally savvy communities. To this end, the department has partnered with strategic water stakeholders such as the National Business Initiative and World-Wide Fund to highlight the importance of pollution-free freshwater ecosystems. It also seeks to emphasise the responsibility of protecting rivers, dams and a clean environment.

The urban population around Thohoyandou relies on water supplies from the Vondo Regional Water Scheme in the Mutshindudi River, the most important tributary of the Luvuvhu River. This water source has been almost fully utilised and supplies will soon be augmented from the Nandoni Dam, recently completed on the Luvuvhu River, south- east of Thohoyandou. For many years the town of Makhado has had an allocation of 2.4 million cubic metres of water per annum from Albasini Dam where the municipality built a purification works.

The clearing of the river will also benefit emerging fruit farmers who ply their trade on the catchment of Luvuvhu River. There are about 518 000 people within the Luvuvhu/Mutale River catchments. More than 90% of the population is classified as rural, most of who live in villages and informal settlements, while most of the urban population is found in Thohoyandou. Many of the rural people live in a subsistence economy supported by financial remittances from migrant workers in other centres.

The upper third of the Luvuvhu River catchment is mainly utilised for agriculture with forestry dominating the higher lying areas in the Soutpansberg Mountain Range. The main user of water in this part of the catchment is the Levubu Irrigation scheme situated directly below the Albasini Dam. The middle part of the catchment is heavily populated with the existence of various urban and semi-urban settlements as well as numerous scattered rural villages.

The dam is located to serve the irrigation scheme but the catchment area is relatively arid leading to low yields. Severe water shortages in the early 1990’s prompted intensive development of groundwater to sustain high yielding permanent fruit crops.

It is with great sadness and with a heavy heart we wish to inform the public that the Deputy Minister in the Presidency for Women, Youth and Persons with Disabilities Professor Hlengiwe Buhle Mkhize passed away this morning, 16 September 2021, after a short illness.  We wish to extend our heartfelt condolences to the family, friends, colleagues, comrades, and the many citizens affected by this tragic news.  →