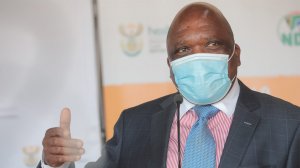 The Department of Health has announced the development of a digital vaccination certificate, which will show proof of vaccination.

Health Minister Dr Joe Phaahla said this initiative is in line with the World Health Organisation initiated vaccination certificate, which the WHO is using in an attempt to standardise vaccination proof across the world.

Phaahla said that in the coming weeks the certificate should be available to all those who are vaccinated. He emphasised that the certificate will not be required to access public services.

The Department said it has ensured that the certificate is protected from fraud adding that it can be uploaded on a smartphone and is also printable.

Sinovac Biotech is starting a Covid-19 vaccine trial in infants, children and adolescents in South Africa as part of a global study.

The phase 3 study will evaluate the efficacy, safety and immune response of CoronaVac in people between the ages of six months and 17 years, with 14 000 participants enrolled in countries including Chile, the Philippines, Malaysia and Kenya. About 2 000 will be from South Africa.

Chief virologist and head of the South African study Sanet Aspinall said the vaccine uses “conventional technology, similar to polio virus and other childhood vaccines”, adding that the safety profile of this particular vaccine is extremely good.

The Democratic Alliance has expressed its disappointment with the Independent Electoral Commission of South Africa's political party funding report, saying it “is hopelessly inadequate”.

The DA is one of three political parties that have made declarations of qualifying donations received from donors.

The DA said that although the IEC mentions that some parties have indicated that they have nothing to declare or did not respond to the reminders, it fails to name those political parties.

The DA said this clearly indicates that the IEC is incapable of implementing the legislation.