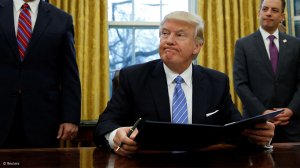 Eskom has said that due to a severely constrained generation system, as a result of multiple unit breakdowns, it will be implementing load-shedding again from 08:00 until 22:00 today.

A total of ten generation units have broken down at seven power stations in a matter of two days, with the power utility citing "unreliable and aged" infrastructure.

The power utility has warned that there is a high probability that additional stages of load-shedding may be implemented at short notice.

US President Donald Trump has said it will not work with an international cooperative effort to develop and distribute a coronavirus vaccine because it does not want to be constrained by multilateral groups like the World Health Organization.

The decision to go it alone, follows the White House's decision in early July to pull the US out of the WHO.

Trump claims the WHO is in need of reform and is heavily influenced by China.

Some nations have worked directly to secure vaccine supplies, but others are pooling efforts to ensure success against a disease that has no geographical boundaries.

Zimbabwe will reopen primary and secondary schools this month for students preparing to sit their final exams, six months after they were closed due to the coronavirus outbreak.

The first students to return, on September 14, will be those taking Cambridge International exams.

The education ministry had previously said it would give priority to pupils taking final exams and has hinted that other students will not return to school until 2021.

For most of its existence, the ANC Youth League has played a powerful role in the politics of the ANC, and therefore of South Africa. This book tells the history of the ANC Youth League, from its formation in 1944 to the present day. The book explores the radicalising role played by its early leaders, such as Nelson Mandela, Walter Sisulu and O.R. Tambo; the formation of the ANC Youth and Students Section in exile, first led by Thabo Mbeki; the return from exile in the 1990s and the leader­ship of Peter Mokaba; the controversies around the appointment of Julius Malema and his subsequent sacking; and the absence of Youth League leadership in the #FeesMustFall movement and current South African politics. Finally, the book considers the role that the Youth League should play in the future. →