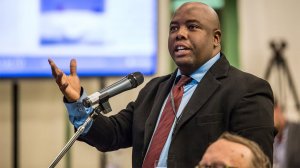 DA Gauteng provincial chairperson Mike Moriarty said the DA wished Mokgalapa success in his future endeavours, “whatever they may be”.

In February, the DA summoned Mokgalapa to a disciplinary hearing to explain statements he made in a purported sex audio recording widely circulated last year.

In the recording Mokgalapa could be heard bad-mouthing senior municipal officials and his colleagues in the political arena.

The court held that the Palm Ridge Specialised Commercial Crimes Unit had misdirected itself in law and in fact when it denied Agrizzi bail on October 14 after state prosecutors argued that he was a flight risk.

The Independent Directorate of the National Prosecuting Authority had submitted that Agrizzi had failed to honestly disclose his finances and the fact that he still held an Italian passport.

It also told the court that he had purchased a home in the Tuscan town of Castel del Piano.

The liquidator of VBS Mutual Bank has received all claims from depositors that were lodged against the defunct bank and has begun a reconciliation process, according to an update given by the South African Reserve Bank.

This included claims exceeding the threshold of R100 000, beyond which claims are guaranteed by the Reserve Bank.

According to data given by the liquidator, Anoosh Rooplal, these included 171 claims from individual retail depositors with a cumulative value of R41.5-million, and 240 claims from stokvel saving groups, burial societies and other entities to a total value of R20.5 million.

It also included claims from municipalities who lost vast amounts of money after being manipulated into making deposits with VBS, in breach of public finance rules.

Rooplal said the liquidators would communicate regularly with proven creditors to keep them updated on the liquidation process.