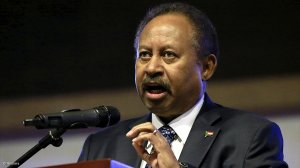 This comes as he faces two murder charges and one attempted murder charge relating to an August shooting in which two people were killed and one injured.

Mtsweni-Tsipane said the decision was taken after consideration of the seriousness of the charges the MEC is facing, as well as the impact it would have on his work.

She added that the ANC has set itself a moral standard, which its public representatives have to abide by.

South Africa has recorded 592 new confirmed Covid-19 infections and 83 new deaths, bringing the death toll to 88 429. KwaZulu-Natal accounted for 22% of the new cases recorded in the last 24 hours.

According to a statement by the National Institute for Communicable Diseases, as of Tuesday, the country recorded over 2.9-million laboratory-confirmed cases.

Sudan's security service has slapped a travel ban on members of a task force overseeing the country's transition to democracy, government sources said, as tensions between civilian and military leaders threaten to boil over weeks after a failed coup.

The political crisis erupted on September 21, when Prime Minister Abdalla Hamdok said rogue troops still loyal to Omar al-Bashir had sought to derail by force the revolution that removed the ousted president from power in 2019.

Two senior civilian government sources said the travel ban affected 11 civilian officials in all, most of them members of the Committee tasked with dismantling Bashir's financial and political legacy.

There was no immediate comment from the GIS or military representatives.

If we want to remedy our current choiceless democracy, we must re-establish link between politics and the people

Professor Raymond Suttner says "If we want to remedy our current choiceless democracy, we must re-establish link between politics and the people". Read the column here. →