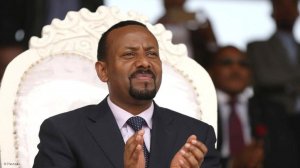 As part of the country’s efforts to ensure the full and equal participation of women in the economy, President Cyril Ramaphosa announced today that the country will hold its first-ever Women’s Economic Assembly later this week.

According to the National Institute for Communicable Diseases, as of Sunday, the country recorded 2 906 422 laboratory-confirmed cases.

This represents a 3.4% positivity rate.

Ethiopia's parliament has confirmed incumbent Abiy Ahmed as prime minister for a five-year term on Monday, cementing his power domestically amid mounting international concern of his government's handling of the conflict in northern Ethiopia.

President Sahle-Work Zewde told parliament that government priorities included easing inflation - which has hovered around 20% this year - and the cost of living, as well as reducing unemployment.

On Thursday, Ethiopia announced it was expelling seven senior United Nations officials and gave them 72 hours to leave, a move the UN rejected.