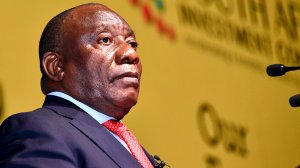 Ramaphosa to face motion of no confidence next week

President Cyril Ramaphosa will face a motion of no confidence next Thursday.

ATM leader Vuyo Zungula previously said the president had failed to provide leadership for the country.

This will be the first time that Ramaphosa’s leadership will be under scrutiny in Parliament through a motion of no confidence.

The government's decision to cut service delivery funds to bail out South African Airways will be one of the questions coming Deputy President David Mabuza's way today in the National Assembly.

The matter also arose when President Cyril Ramaphosa answered questions in the National Assembly two weeks ago, and on Wednesday, when it was Health Minister Zweli Mkhize's turn to be quizzed.

Other matters Mabuza will have to respond to are Eskom, gender-based violence, land reform and the state of municipalities.

The hybrid sitting is scheduled to start at 14:00.

About 225 000 HIV/AIDS patients in Gauteng have discontinued their ARV treatment, while data suggests that the South African province is not doing well in suppressing the virus, the Democratic Alliance party said.

The health department partly blamed the drop on disruptions caused by the Covid-19 pandemic.

DA head of health in Gauteng Jack Bloom said he was also concerned that new estimates from the Thembisa mathematical model of HIV in South Africa show that Gauteng is not doing well in suppressing the HIV virus in all affected people.