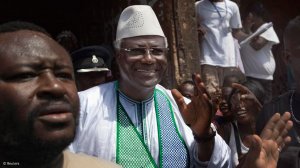 Of the 65 deaths, 26 were reported in the Eastern Cape, 19 in the Free State, two in Gauteng, three in Limpopo, eight in North West and seven in the Western Cape.

Health Minister Dr Zweli Mkhize has extended condolences to the loved ones of the departed and thank the healthcare workers that treated the deceased patients.

Mkhize expressed concern as the country registered a positivity rate of 14%.

US President-elect Joe Biden was formally given the go-ahead by a federal agency to begin his transition to the presidency, shortly after the battleground state of Michigan certified him as the winner there.

With the rapid-fire developments, President Donald Trump’s already languishing efforts to overturn his November 3 defeat appeared to be coming to a close.

The US General Services Administration, an independent agency, informed Biden that his transition – leading up to a January 20 swearing-in – could officially begin.

Sierra Leone's former President Ernest Bai Koroma was questioned in a secure location in connection with investigations into alleged corruption after his lawyer cited concerns over his safety, the anti-corruption commission said.

The case concerns alleged wrongdoing in connection with mining, construction and procurement contracts during Koroma's 2007 to 2018 tenure.

Koroma denies the allegations, and has said corruption allegations are part of a long-running smear campaign.

Making headlines: Zondo to lay criminal complaint against Zuma; Ramaphosa calls for Gender-Based Violence change ahead of 16 Days of Activism; And, Burkina Faso holds election under looming threat of violence →