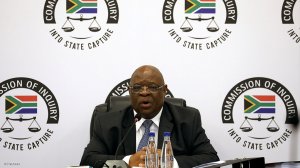 Zuma to lodge review as Zondo dismisses his recusal application

Judge Raymond Zondo has dismissed the application brought by former president Jacob Zuma for his recusal from hearing his eventual testimony before the state capture commission.

Zondo said he was satisfied that the Zuma’s application has no merit.

He said Zuma had failed to meet the test for a reasonable apprehension of bias, after faulting the manner in which the test had been interpreted by the former president’s lawyer Muzi Sikhakhane.

Feelings of uncertainty and fear roam the corridors in the newsrooms of the South African Broadcasting Corporation after employees received retrenchment notices.

The public broadcaster has been dealing with severe funding issues in recent years, even failing to pay salaries on time last year.

Government has in the last financial year extended R3.2-billion to help the company stay afloat.

On Tuesday, the entity reported a net loss of R511-million and net cash outflows from operations of R1.2-billion for the financial reporting period to 31 March.

Total coronavirus cases in Africa surpassed the 2-million mark on Wednesday despite the slow addition of reported infections compared to other regions around the world.

With over 2-million cases, Africa represents under 4% of the world's reported cases, which many experts believe to be an undercount.

They believe that many Covid-19 infections and related deaths in Africa are likely being missed as testing rates in the continent of about 1.3-billion people are among the lowest in the world, and many deaths of all types go unrecorded.