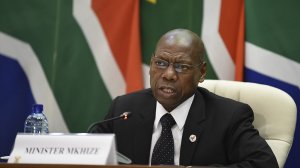 This year’s South African Investment Conference, taking place on November 17 and 18, will build on momentum from the last two events to highlight to investors South Africa’s investment opportunities.

In his weekly letter to the nation, President Cyril Ramaphosa said the third investment conference will be crucial as the country deals with the coronavirus pandemic.

He reminded the nation of the R1.2-trillion investment secured in 2018 and added that foreign direct investment flows into South Africa increased from R26.8-billion in 2017 to R70.6-billion in 2018.

This year’s conference, he said, will show the progress being made to improve the business climate in the country.

ANC activists call for Magushule court supporters to be charged

The Strategic Dialogue Group, an organisation made up of the ruling ANC activists, has called on the party’s National Executive Committee to charge its members who defied party instruction and supported embattled ANC Secretary General Ace Magashule in court.

He appeared in the Bloemfontein magistrate’s court on Friday on corruption charges and had appealed to ANC supporters not to protest in support of him or print T-shirts and placards in his name.

The SDG said members who defied the order undermined ANC renewal efforts and should be charged and disciplined as per ANC policy.

The South African government will be looking to parts of its coronavirus Resurgence Action Plan when mitigating the risk of further increases in Covid-19 positive cases from cluster outbreaks in the Eastern Cape and Western Cape.

Minister of Health Dr Zweli Mkhize said the plan included heightened surveillance in areas with cluster outbreaks, with a further approach to deal with such cases at a district and sub-district level.

The plan also calls for the scaling up of resources in affected areas for Covid-19 testing and contact tracing as well as for quarantine and isolation facilities.

The Minister is expected to visit the Eastern Cape later this week to assess the province’s readiness should a further surge in cases occur.