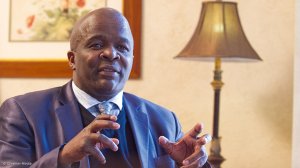 Image of Minister in the Presidency Mondli Gungubele

Minister in the Presidency Mondli Gungubele said that the trends in the country’s Covid-19 cases will determine whether the National State of Disaster on Covid-19 will be extended or not.

Gungubele was briefing media on the outcomes of the Cabinet meeting held yesterday.

Last month Minister of Cooperative Governance and Traditional Affairs Dr Nkosazana Dlamini-Zuma gazetted the extension of the National State of Disaster until November 15.

Gungubele said the President will decide when to call a meeting, adding that for now government is excited about the positivity rate, which stands at 2.6%.

The National Freedom Party in KwaZulu-Natal has threatened to go to court to stop the announcement of the voting results, claiming that it won more wards in the eDumbe Local Municipality than the number the Electoral Commission of SA recorded.

With just hours left to the release of the results, the NFP said that it was approaching the KwaZulu-Natal High Court in Pietermaritzburg on an urgent basis.

The IEC said it was awaiting the court action.

ActionSA is celebrating in KwaZulu-Natal after securing an 8.47% win in the KwaDukuza municipality, on the north coast.

This means the party has won five seats in the municipality.

Khoza said ActionSA is humbled that, as a party that is just over one-year old, they have made an undeniably groundbreaking mark in the six municipalities they contested which are Johannesburg, Tshwane, Ekurhuleni, eThekwini, KwaDukuza, and Newcastle.