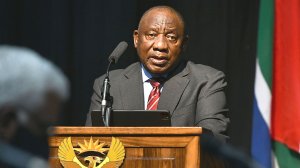 Making headlines: Ramaphosa considering Mkhwebane’s reasons for why she should not be suspended; Zuma suffers new setback in corruption trial; And, weekend load-shedding to stay on Stage 2 for now

President Cyril Ramaphosa said today he will consider Public Protector Busisiwe Mkhwebane’s representations, after he had asked her, in March, to provide him with reasons why he should not suspend her.

Parliament is pushing through with Mkhwebane's impeachment proceedings, opening the way for Ramaphosa to suspend her.

In February, the Constitutional Court effectively gave the Section 194 Committee, which handles the proceedings, the green light to continue with the impeachment as long as Mkhwebane was allowed legal representation.

Former President Jacob Zuma has suffered another setback in his attempts to remove the lead prosecutor from his arms deal corruption trial, as a top judge dismissed his latest petition in the Supreme Court of Appeal.

Zuma, is accusing the prosecutor of bias against him.

He has pleaded not guilty to charges including corruption, money laundering and racketeering in the long-running arms deal case.

Zuma had asked supreme court president, Justice Mandisa Maya, to reconsider an earlier ruling by two supreme court judges and allow him to appeal a High Court decision not to take the lead prosecutor off the case.

And, weekend load-shedding to stay on Stage 2 for now

Load-shedding will remain on Stage 2 during evening peak hours over the weekend,.

Eskom spokesperson Sikonathi Mantshantsha said any changes would be announced.

Last week, load-shedding was rolled out intermittently and reached Stage 4 on Saturday. By Sunday, the power utility announced that Stage 2 load-shedding would be implemented from 17:00 until 22:00 throughout the week.

Eskom said it would try, "as far as possible", to limit load-shedding outside of these hours.

The embattled power company has been facing instances of sabotage at its plant as it tries to catch up on badly needed maintenance, leaving it facing critical shortages of supply.