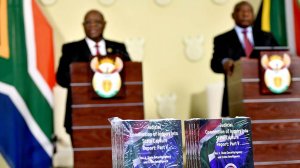 ANC Gauteng conference gets under way as leadership slates firm up

A fierce contest to determine who should lead the African National Congress in Gauteng is expected to take centre stage at the party's provincial conference in Benoni this weekend.

Deputy chairperson in Gauteng, Panyaza Lesufi, will go up against provincial executive committee member Lebogang Maile for the chairpersonship.

Despite the provincial leadership's assurances that there will be less security at the conference, roads leading to the Lakes Hotel and Conference Centre were barricaded and there was a heavy police presence. Gauteng secretary Jacob Khawe, who condemned the heavy security at the Ekurhuleni conference, gave the assurances.

The conference was delayed on Thursday because some delegates had not yet finalised their accreditation.

The Public Protector’s office wants President Cyril Ramaphosa to submit a plan to Parliament on how the recommendations from the State Capture Commission of Inquiry will be implemented.

Commission chairperson Chief Justice Raymond Zondo handed over the final part of the report to Ramaphosa on Wednesday night.

The Public Protector wants to be kept informed of all the implemented recommendations and hopes to monitor the progress of this from reports submitted by Parliament and the Presidency.

The Public Protector’s office has sent Ramaphosa a letter requesting copies of the Commission’s report in full.

And, load-shedding to hit stage 4 all weekend after wage talks deadlock

Eskom spokesperson Sikonathi Mantshantsha said load-shedding is necessary to bolster emergency generation reserves to react to unforeseen circumstances, as well as to replenish emergency reserves to prepare for the week ahead.

Mantshantsha added that this would help fill the generation deficit while dealing with generating units that may trip amidst the disturbances and compensate for the inability to return generating units timeously to service.

Eskom also warned that there would be a high risk of load-shedding in the coming weeks. A total of 2 766MW is on planned maintenance, while another 17 395MW of capacity is unavailable due to breakdowns.