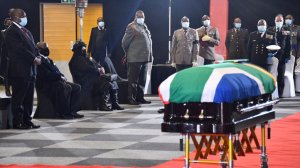 Making headlines: Lesufi bids farewell to Accused No 10 Andrew Mlangeni, with harsh words for the SA he left behind, Mkhize calls for occupational health and safety committees at every level, and Thulas Nxesi discharged from hospital, remains in quarantine

Lesufi bids farewell to Accused No 10 Andrew Mlangeni, with harsh words for the SA he left behind

Bidding farewell to anti-apartheid veteran Andrew Mlangeni, Gauteng Education MEC Panyaza Lesufi had strong words for the South Africa that he left behind.

Giving the welcoming address at Mlangeni's funeral on Wednesday, Lesufi remarked on the corrupt and selfish nature of post-apartheid leaders.

Lesufi said it would be disingenuous not to state that the freedom Mlangeni fought for, may lose its character if it does not self-correct.

Mkhize calls for occupational health and safety committees at every level

In a bid to ensure continuous engagement with all stakeholders critical to the fight against coronavirus, Health Minister Dr Zweli Mkhize has given a directive for occupational health and safety committees to be created at a provincial, district and local hospital level.

This was according to a statement issued on Wednesday by his department following the National Education, Health and Allied Workers' Union’s announcement that it planned to protest the lack of personal protective equipment for workers.

The Department of Health said in a statement on Wednesday that constructive engagements between management and unions have always been encouraged to create teamwork in the fight against Covid-19.

Employment and Labour Minister Thulas Nxesi will go into self-quarantine following his release from the Steve Biko Academic Hospital, after testing positive for coronavirus on July 17.

Nxesi was admitted to hospital on July 21.

His department has seen a few of its officials testing positive for the virus resulting in a few centres being closed temporarily.

Cabinet spokesperson Phumla Williams said that Nxesi would remain quarantined until he recovers.