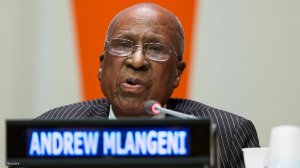 Andrew Mlangeni, the last of the Rivonia trialists, who passed away last night, "was a selfless pillar to which the ANC could hold onto," said former colleague and cabinet minister Derek Hanekom on Tuesday.

Hanekom said the 95 year old’s passing means the passing of a generation of leaders of great integrity.

Mlangeni was designated accused no. 10 during the Rivonia trial, which saw him appear on charges of treason alongside other ANC leaders.

The South African Department of Agriculture, Land Reform and Rural Development received its budget allocation for the 2020/2021 financial year.

This follows the national budget vote in February by Finance Minister Tito Mboweni.

The received amount of R14.4-billion is a reduction of R2.4-billion from its initial allocation.

Didiza explained that the greatest portion of cuts in allocation occurred within the department’s programmes that deliver on food security, land redistribution and restitution.

Not-for-profit organisation Corruption Watch today released its ‘X-Ray: The critical state of the health sector in SA’ report which aims to uncover the impact of corruption in the healthcare sector.

The report demonstrates how people who are reliant on public health facilities in South Africa bear the brunt of corruption.

Since its launch in 2012, CW has received almost 700 reports of corruption in the health sector.