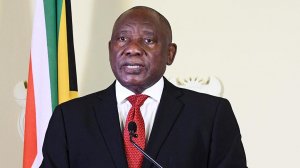 The Standing Committee on Public Accounts is conducting its own probe into public fund misappropriation allegations against the African National Congress, which surfaced in a leaked audio recording, even though the matter has already been referred to the Public Protector.

In the clip, someone who sounds like President Cyril Ramaphosa can be heard admitting that he was aware that the party used public funds for party purposes. The person suggested that the funds came from the State Security Agency.

The committee believes that the comments only reflect a part of the discussion that was captured in the clip and that the publicly available portion has far-reaching implications. On Tuesday evening, the committee resolved that it was necessary for the committee to conduct its own probe.

Limpopo Economic Freedom Fighters councillor Anthony Matumba, who is caught up in fake Twitter account allegations, is due to be sworn in as a member of Parliament.

The Makhado Local Municipality councillor confirmed the development on Tuesday but said he would respond to detailed questions at a later stage.

Matumba is alleged to be the person behind a fake Twitter account "Tracy Zille", which was used to spread disparaging, racist and hateful comments.

The Human Rights Commission took Matumba to the Equality Court after it received a complaint from a member of the public about tweets from the Twitter account.

And, 3 197 new infections and 23 deaths recorded in South Africa

According to the National Institute for Communicable Diseases as of Tuesday, the country recorded 23 new Covid-19-related deaths, bringing the confirmed death toll to 94 397.

There were 179 new hospital admissions in the last 24-hour reporting cycle. As of Tuesday, 6 284 people were in public and private hospitals for Covid-19.