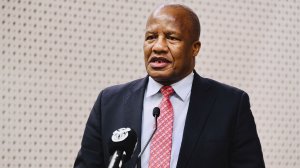 Minister in the Presidency, Jackson Mthembu

The death of Minister in the Presidency, Jackson Mthembu, shocked and saddened MPs from both sides of the House.

Mthembu, chief whip of the ANC in the National Assembly from 2016 to 2019, died from Covid-19 related complications on Thursday, after testing positive for the virus.

They said he was a patriotic South African and a strong defender of constitutional democracy.

The DA wants an ad hoc committee to oversee Deputy President David Mabuza's inter-ministerial committee which will spearhead the rollout of Covid-19 vaccines.

Amid much criticism of government's apparent tardy move to procure Covid-19 vaccines, President Cyril Ramaphosa announced on Tuesday that Mabuza would head the inter-ministerial committee to oversee the rollout of Covid-19 vaccines across the country.

DA MP and spokesperson Siviwe Gwarube said she would write to Speaker of the National Assembly Thandi Modise to ask for an ad hoc committee to oversee the committee.

Nigeria approves release of $16.9-million to set up oxygen plants amid Covid-19 surge

Nigeria's president has approved the release of 6.45-billion naira to set up oxygen production plants in 38 sites to help treat Covid-19 patients as authorities contend with a sharp rise in cases.

Africa's most-populous country, where officials recorded low coronavirus numbers through much of last year, is in the grip of a second wave of infections.

The presidency said the release of funds to address the provision of oxygen was announced at a meeting of the National Economic Council advisory body.