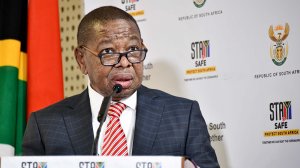 Making headlines: Mkhize says doctors lobbying for Ivermectin must approach health authority to run clinical trials, Nehawu disappointed with Nzimande’s ‘lack of consultation’ and, Army deployed until end of January at a cost of over R95-million

Health Minister Dr Zweli Mkhize says doctors who want to use Ivermectin to treat Covid-19 symptoms should register with the South African Health Products Regulatory Authority to run clinical trials on the drug.

The minister has been inundated with messages from people lobbying for the drug and has seen letters that were written to President Cyril Ramaphosa for the same reason.

Mkhize said that the regulatory authority has indicated that everyone is welcome to order the drugs and participate in a trial.

The National Education, Health and Allied Workers’ Union noted Higher Education and Training, Science and Innovation Minister Blade Nzimande’s briefing on the reopening of higher learning institutions, but expressed disappointment that he had not consulted with the union.

The union said that the lack of consultation undermined its existence in the sector and discouraged labour peace in higher learning institutions.

Meanwhile, the union emphasised the need for all workplaces to have functioning health and safety committees and specifically urged higher learning institutions to ensure that staff and students have adequate personal protective equipment and sanitisers and that social distancing is adhered to.

A recent letter from President Cyril Ramaphosa has revealed that 2 122 South African National Defence Force members have been deployed to the streets of South Africa from December 29, 2020 to January 31, 2021 to enforce Covid-19 restrictions, at a cost of R95 666 944.

The Joint Standing Committee on Defence co-chairperson Cyril Xaba said this was in support for efforts that safeguard the lives of South Africans during the pandemic.

The committee reinforced that the deployment intended to preserve lives, health and property in emergency or humanitarian relief operations in support of other government departments and in cooperation with the South African Police Service, to prevent crime and enforce restrictions under the adjusted Level 3 lockdown regulations.