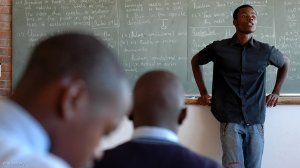 Making headlines: Basic Education delays re-opening of schools by two weeks; Israeli official tells SA the cost of the vaccine is low compared to the damage of lockdowns; And, SA records 712 new deaths

The Department of Basic Education and the National Coronavirus Command Council announced on Friday that the reopening of private and public schools will be delayed by two weeks.

The new dates for the reopening of private schools will vary depending on the calendar that they follow.

For public schools and private schools which follow the same calendar, School Management Teams will report for duty on January 25, teachers will go back to school on February 1, and learners will return on Monday, February 15.

The schools that have already reopened have been persuaded to consider closing and reopen on February 15.

The head of international relations in the Israeli Ministry of Health Dr Asher Salmon has said the cost of the Covid-19 vaccine is "ridiculously low" in comparison to the economic damage brought on by national lockdowns.

Israel has been praised in various international media reports for leading the world in vaccinating its population.

According to Vox News, Israel's vaccination rate is nearly 7 times that of America. The country reportedly gave vaccine shots to approximately 150 000 people per day over the past few weeks.

As of Thursday, the country recorded over 1.2-million confirmed cases, which means that there was a single-day increase of 18 503 cases.

Of the total deaths recorded on Thursday, 232 were from KwaZulu-Natal, 162 from the Western Cape, 114 from Gauteng, 97 from the Eastern Cape, 50 from the North West, 21 from the Free State, 11 from Limpopo, 15 from the Northern Cape and 10 from Mpumalanga.

Gauteng remains the worst-hit province with 27.1% of the total confirmed cases, translating to 350 976 infections.