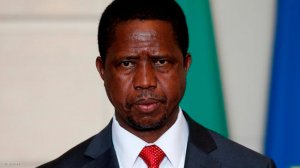 Gauteng remains the most affected province with 27.1% of the total confirmed cases.

To date, more than 7-million tests have been completed, with over 63 000 tests conducted in the past 24 hours.

Business Leadership South Africa CEO Busi Mavuso has lamented South Africa’s lack of a vaccine strategy and says that, with the end of the festive season, “it became clear” that the basics thereof had not been in development yet.

In her first weekly newsletter of 2021, she said that, unlike many other developed and developing countries, South Africa had not negotiated any “advance market commitments” with manufacturers to buy vaccines conditional on their successful approval following trials.

While this is a start, Mavuso stressed that it is “far from enough”.

Zambian President Edgar Lungu has dismissed Health Minister Chitalu Chilufya with immediate effect, without giving a reason for the move.

Once seen as a potential presidential replacement for Lungu, Chilufya's political ambitions have faded amid growing calls for his dismissal from opposition parties and health workers.

Chilufya, health minister since his appointment in 2016, was not immediately available for comment.