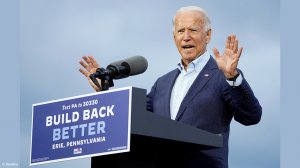 South African Breweries said it would go to court to challenge the constitutionality of the government’s decision to ban alcohol for the third time since last March as part of efforts to rein in the Covid-19 pandemic.

President Cyril Ramaphosa announced the ban 10 days ago as he moved the country back into a stricter “level 3” Covid-19 lockdown amid a spike in infections in a second wave of the pandemic.

The Beer Association of South Africa, which comprises the Craft Brewers Association, Heineken South Africa and SAB, has already condemned the ban, saying small brewers in particular might not be able to stay in business as a result.

After a chaotic day of protest and violence, Congress has certified Democrats Joe Biden as the next president and Kamala Harris as vice president of the United States.

The action finalises the 2020 US electoral process and makes clear that Biden will be inaugurated as president on January 20, President Donald Trump’s refusal to concede notwithstanding.

Ruling party, the ANC on Thursday announced that its yearly January 8 statement will be dedicated to strengthening unity and deepening the renewal of the movement for the sake of future generations.

ANC president Cyril Ramaphosa is expected to deliver the statement on Friday night, virtually, in line with the coronavirus pandemic regulations.

The insignia for this year’s 109th anniversary consists of a Baobab Tree.

The statement is expected to unveil the ANC programme of action for the year.