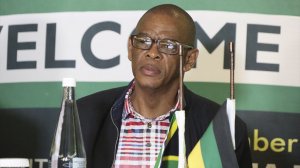 Magashule appeared in court for the second time to face allegations related to a contract to audit houses with asbestos roofs, awarded while he was premier of the Free State province.

In brief proceedings on Friday at the Bloemfontein Magistrate’s Court, the case was transferred to a higher court where pre-trial proceedings will commence on August 11.

Police Minister Bheki Cele admitted that his department has to go back to the drawing board to strategise how to tackle cash in transit robberies which has seen 26 more attacks in the third quarter of 2020/2021.

He released the country’s crime statistics for October to December 2020, which saw a 6.6 % increase in murders.

A total of 2 481 people were murdered in public places and 1 643 murders occurred at the home of the victim or the perpetrator.

Mpumalanga province recorded the highest increase of 13.7% when compared to the corresponding period in the previous financial year.

The Joint Standing Committee on Defence said on Friday it supported the partnership of 2 122 South African National Defence Force soldiers and the South African Police Service from February 1 to 28, as part of the adjusted level 3 lockdown regulations.

The extension of the deployment of the 2 122 SANDF members comes with an expected expenditure of about R64.7-million.

The committee expressed satisfaction with reasons given by President Cyril Ramaphosa for the extended deployment.