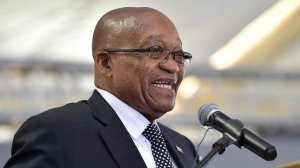 Parliament has confirmed that former President Jacob Zuma will be attending his successor President Cyril Ramaphosa's State of the Nation Address on Thursday.

In a surprise move the day before SoNA, both Parliament and the South African government's official twitter pages confirmed that Zuma would be in attendance when the speech begins at 19:00.

Zuma had not attended any of Ramaphosa's previous three SoNAs.

The Economic Freedom Fighters on Wednesday continued its attack on Public Enterprises Minister Pravin Gordhan, publishing a ten-point pamphlet setting out its reasons for demanding President Cyril Ramaphosa fire one of his key political allies.

The list starts with the discredited claims that Gordhan established an illicit intelligence gathering unit within the South African Revenue Service when he headed it.

Another reason it raises is the early retirement with full benefits of former Sars deputy commissioner Ivan Pillay, who was subsequently rehired on a fixed term basis.

Both matters go back more than a decade and have been dismissed by the National Prosecuting Authority and the Hawks, but revived in investigations by Public Protector Busisiwe Mkhwebane in response to complaints filed by the EFF.

A statement of hope that energises the people of South Africa is what the ANC expects from the State of the Nation Address on Thursday.

The party's spokesperson, Pule Mabe, said after its lekgotla, the SoNA needed to reinvigorate the people and that it must be a strong message of hope, one that begins to energise our people and assures them that things are going to be better.

He said the overall message needed to be one of assurance, hope and nation building.