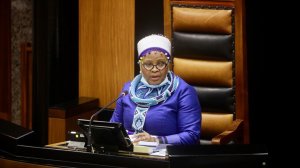 Ramaphosa’s rivals says ANC NEC must not remove president, the conference should decide

President Cyril Ramaphosa's main political rivals, Paul Mashatile and Zweli Mkhize, are expected to push back against calls for his removal during the ANC national executive committee meeting today.

A key Mashatile ally and lobbyist, Nkenke Kekana, said the NEC could not seek to remove Ramaphosa and that the president's fate should be decided at the party's conference.

Mkhize's communication advisor, Vuyo Mkhize said Dr Mkhize's view is that the NEC would be well-advised to defer the question of whether President Ramaphosa should be forced to resign or not to the delegates who would be gathering in Nasrec in less than two weeks' time to decide.

He is expected to argue at the ANC meeting that he, too, subjected himself to a parliamentary process and was cleared by the legislature with regard to the allegations he faced.

Speaker rejects request for secret ballot on Section 89 report a

Zungula wrote to the Speaker and requested that she consider allowing MPs to vote through a secret ballot following the debate on the Section 89 panel report on Tuesday.

President Cyril Ramaphosa is trying to garner support for a second term as ANC president, as the party prepares for its fifty-fifth Electoral Conference.

The ANC’s National Working Committee has instructed its MPs to oppose the adoption of the report which found that Ramaphosa may have violated the Constitution.

Opposition parties, as well as those within the ANC implicated in the State Capture report, have called for Ramaphosa to step down.

Choguel Maiga will resume his role as Mali's transitional prime minister today after more than three months of medical leave, according to a decree read on state television on Sunday.

Maiga was ordered by his doctor to rest in August after months of intense exertion.

He was temporarily replaced by Colonel Abdoulaye Maiga, government spokesperson and minister of territorial administration.

Maiga has been one of the government's most outspoken voices in repeated public rows with West African neighbours and international allies who criticised its military cooperation with Russian mercenaries and repeated election delays.