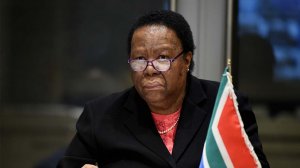 South Africa should use lessons from the pandemic to focus on ensuring that it can manufacture vaccines in future, rather than just advocating that these should be made freely available to all, International Relations and Cooperation Minister Dr Naledi Pandor has said.

Pandor spoke during a lecture organised by the South African BRICS Think Tank, made up of researchers and academics where she said there was no better lesson than the pandemic, towards the importance of research development and innovation.

A former minister of science and technology said South Africa couldn't be "arguing for vaccines to be a public good, but we are not able to devise a vaccine ourselves".

She said South Africa had the capability, the intellectual might and the institutions that could do this.

South Africa’s Parliament has passed the Upgrading of Land Tenure Rights Amendment Bill which aims to change the 1991 law of the same name so as to allow for the conversion of land tenure rights into ownership, among other things.

Parliament said its lower house, the National Assembly, passed the bill during its plenary session and it would now be sent to the upper house, National Council of Provinces, for concurrence.

The ruling ANC has a comfortable majority in both chambers.

The bill was necessitated by two orders of the Constitutional Court which found that the Upgrading of Land Tenure Rights Act of 1991 was unconstitutional because it discriminated against the rights of women to independently own property, while a section of it was inapplicable in some former homelands that existed during apartheid rule.

Health Minister Dr Zweli Mkhize said the cumulative total of Covid-19 cases recorded in South Africa is 792 299, with 2 295 new cases identified since the last report. Recoveries are at 732 531.

The key to unlocking value of Kabanga Nickel and enabling the full beneficiation of new era metals in Tanzania is an environment-friendly hydrometallurgy process that eliminates smelting and thus slashes the need for electricity. The Kabanga Nickel Hydromet process – which takes ore to refined metals at lower capital and operating costs cutting carbon dioxide (CO2) emission by 80% and eliminating sulphur dioxide (SO2) emission altogether – is seen as a game changer for Tanzania, by providing the maximum in-country value-add to the East African nation. →