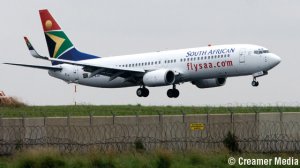 Privately owned airline Airlink said it was disappointed, but respected the Supreme Court of Appeal’s decision to dismiss its claim against South African Airways.

Airlink, which services the southern Africa region, applied to the Johannesburg High Court in January for a declaratory order that would compel SAA, which has been under business rescue since last December, to return R510-million of funds from ticket sales the state-owned airline had collected on Airlink’s behalf.

Airlink then approached the Supreme Court after the High Court dismissed its application in March.

On Tuesday Airlink said while it fully respected the Supreme Court’s dismissal, “it is nonetheless disappointing and demonstrates that the law is not always just”. The airline said it would study the judgement and consider its options.

South African President Cyril Ramaphosa will, on Friday, preside over a virtual debate on African Union and United Nations cooperation, as the country assumes the rotating monthly Presidency of the United Nations Security Council today.

This is the second time that South Africa has assumed the Presidency, during its two-year elected term on the Council, from 2019 to December 2020.

On Thursday, International Relations and Cooperation Minister Naledi Pandor will oversee a virtual debate on Security Sector Governance and Reform.

Meetings will also be held to discuss issues in Afghanistan, Central Africa, the Democratic Republic of Congo, Palestine, Somalia, South Sudan, the Republic of Sudan, Syria and Yemen.

Somalia expelled Kenya's ambassador and recalled its own envoy from Nairobi after accusing its neighbour of interfering in the electoral process in Jubbaland, one of Somalia's five semi-autonomous states.

Relations between the countries have been tense over the ownership of potential oil and gas deposits, some of which lie off the coast of Jubbaland.

Somalia did not go into further details on the alleged interference, while Kenya denied any wrongdoing and dismissed what it called "unsubstantiated allegations".