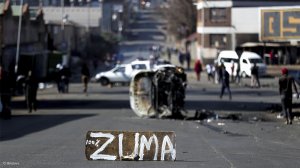 Making headlines: 20 July unrest suspects get bail; Zizi Kodwa says he had 'no prior knowledge' of theft at Ramaphosa's farm; And, rigging allegations begin as Kenyan media slow tally of votes in tight presidential race

The 20 suspects arrested for their role in the July unrest last year have been released on R3 000 bail in the Durban Magistrate's Court.

The group were warned to return to court on August 26 with the State saying that more arrests were imminent within the next seven days.

There were no well-known public figures among those arrested.

Meanwhile, President Jacob Zuma's daughter Dudu Zuma-Sambudla is being investigated in connection with the July unrest. She was not arrested.

Deputy State Security Minister Zizi Kodwa distanced himself from the Phala Phala farm theft, saying he had no prior knowledge of the incident.

Kodwa said he only became aware of the theft at President Cyril Ramaphosa's farm when the news broke in the media.

This comes after Parliament's Joint Standing Committee announced it would investigate Kodwa for his alleged role in the aftermath of the Phala Phala farm robbery.

It was alleged that secret crime intelligence funds were used to covertly investigate the robbery that took place at Ramaphosa's farm in February 2020 and that Kodwa had accompanied the head of the Presidential Protection Unit during secret interactions between the South African and Namibian authorities.

Kodwa says this is untrue.

Without providing any proof, the secretary-general of Kenya's governing party has said the country's elections were rigged, fuelling public anxiety today as media houses significantly slowed down their unofficial tallies of the presidential vote.

Only the electoral commission is authorised to declare a winner, but the tallies were seen as a bulwark against the kind of rigging allegations that have previously sparked violence.

Outgoing President Uhuru Kenyatta must step down after serving the constitutional maximum of two five-year terms. His would-be successors are former political prisoner and veteran opposition leader Raila Odinga and Deputy President William Ruto. Kenyatta has fallen out with Ruto and endorsed Odinga.

So far, the polls were generally praised by international observers.