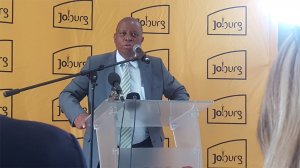 Making headlines: IEC dismisses objections against party candidates and says list process is shut, Mashaba willing to join Ramaphosa during visit to Alex and, Eskom can’t be sued for load-shedding

Electoral Commission of South Africa head Mosotho Moepya has again rejected claims by the African National Congress that it can withdraw candidates from its nomination lists for Parliament and provincial legislatures.

In a media briefing on Tuesday, Moepya told journalists that under no circumstances could candidates be removed from lists, unless instructed by the courts.

Speaking to journalists on Monday, elections head Fikile Mbalula insisted the party could, if prompted by the committee, ask nominees to step down.

Meanwhile, the IEC revealed it had dismissed all but one of the 52 objections it received before the April 2 deadline.

Mashaba willing to join Ramaphosa during visit to Alex

Although protesting Alexandra residents no longer want Johannesburg Mayor Herman Mashaba to address them, Mashaba says he is willing to join President Cyril Ramaphosa during his visit to the township.

Mashaba said Alex was not just the City of Johannesburg's problem.

He said the DA was a new government wherein a lot of promises had been made by the province and national government to people of Alexandra.

On Monday, Gauteng Premier David Makhura announced on Twitter that he would visit the township on Tuesday. Ramaphosa will be there on Thursday.

Eskom can’t be sued for load-shedding

Eskom says that based on legal advice it has received, a law firm seeking to initiate a class action suit against it on behalf of companies which have been affected by load-shedding, has little ground to stand on.

De Beer Attorneys announced last month that it would initiate a class action suit against the power utility and invited businesses to join.

Eskom spokesperson Khulu Phasiwe said that the legal advice the power utility had received relied largely on the National Code of Practice for Emergency Load Reduction and System Restoration Practices of 2010.