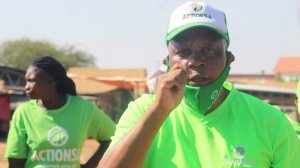 ActionSA president Herman Mashaba on Wednesday expressed anger towards the South African government, calling on citizens and businesses who have been negatively affected by the recent violence and looting to join the party in a lawsuit against President Cyril Ramaphosa and government.

This after protests against the imprisonment of former President Jacob Zuma turned violent, with looting and violence continuing to plague parts of Gauteng and KwaZulu-Natal, putting many people’s livelihoods at risk.

Mashaba said ActionSA will pursue a “ground-breaking” lawsuit against Ramaphosa, the Minister of Police Bheki Cele, members of the Security Cluster, the African National Congress (ANC), and others.

Mashaba said while large sections of KwaZulu-Natal and Gauteng witnessed the destruction of private and public property, the end of businesses and livelihoods, the breakdown of law and order, and the sad loss of life, Ramaphosa and his executive remained deadly silent, and inactive, till the latest moment possible.

He said that Ramaphosa, Cele, and the rest of the executive have a legal obligation to uphold and maintain law and order.

“It is their constitutional duty to ensure that they take proactive and reasonable steps to protect and preserve the rule of law – in so doing, they ensure the protection of our constitutional order and the rights of every South African. A failure or omission to faithfully perform this legal duty must carry consequences as real as those experienced by South Africans, who have lost their lives and livelihoods because of the executive’s incompetence and wilful inaction,” Mashaba added.

He said this legal action will be the first of its kind in democratic South Africa and will seek to finally hold the ruling government to account for its poor governance.

FAILURES AND INABILITY TO TAKE DECISIVE AND PREVENTATIVE ACTION

Mashaba explained that South Africans’ pleas for assistance were met with silence.

He added that communities had to come together to protect their property because law enforcement was nowhere to be seen.

Mashaba said that his party believes that there was more than sufficient jurisprudence that merited this being a strong test case, and that would assist the party in holding the government to account for its “wilful failure to ensure proper law enforcement and the protection of lives, livelihoods and property”.

Mashaba explained that despite numerous opportunities, neither Ramaphosa nor Cele have provided any real reason for their failure to take decisive and preventative action against what is so plainly coordinated criminality.

SA AND THE ANC CANNOT CO-EXIST IN MUTUAL PROSPERITY

“In my 27 years that I have proudly called myself a South African, I have never been angry as I am today. I am angry because our government has produced the perfect storm of poverty, unemployment, racial inequality, hopelessness and desperation that we have witnessed over the past few days,” he said.

Mashaba said South Africa and the ANC cannot co-exist in mutual prosperity, adding that everything that South Africa has just experienced arose from the actions of the ANC and the election of the country’s government.

“Make absolutely no mistake, the violence and disruption emerges directly from the ANC. It was designed and calculated to destabilise the country in a bid by a radical economic transformation faction in the ANC, to challenge the incarceration of Zuma,” Mashaba stated.