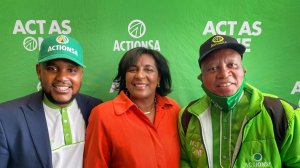 ActionSA revealed on Tuesday the names of the party’s nominated Mayoral candidates for the City of Johannesburg, Tshwane and Ekurhuleni and is urging residents in these metros to vote for their preferred choice.

Party founder and leader Herman Mashaba reaffirmed his choice to be put up as the Mayoral candidate for the City of Johannesburg as the country plans to go into the local government elections in October.

He goes up against other candidates, Suraya Holt and Lincoln Machaba.

Mashaba stressed that as long as the ruling African National Congress (ANC) is in government, he will remain a public servant.

The candidates for the Mayoral positions were selected through ActionSA’s nomination process and must be voted on by the public at vote.actionsa.org.za between 21 and 27 June.

The City of Tshwane candidates are Morris Mahlaule, Maphefo Shubane and Abel Tau.

The candidates for Ekurhuleni are Lerato Ngobeni, Lehlogonolo Moseki and Eleanor Moropa.

ActionSA believes that the nominated candidates will work to bring about change for residents in their cities and deliver quality services.

“We need to make sure that all those who have created the mess in the City are removed. We need to create a professional public service and we need to do lifestyle audits of all the cadre deployments because these are the people responsible in working with the corrupt politicians responsible for the mess we are in,” he said.

ActionSA national chairperson Michael Beaumont challenged other political parties to follow suit and introduce their candidates to the communities they wish to serve.

He said his party is not intending to be an opposition, adding that South Africa does not need small opposition parties.

“South Africans needs a political party that wins, and that improves the lives of the citizens,” he said.

One of the priority areas for ActionSA is undocumented foreign nationals.

Mashaba promised Johannesburg residents that his party will  engage with Home Affairs to deal with the situation.

“We need to expedite the reclaiming of this hijacked derelict abandonment because we need those properties to be given to our people who are living in the periphery of our City,” he stated.

The ActionSA leader said corruption should be declared public enemy number one, adding that ActionSA was “in it to win” in the upcoming elections but declared that it would be up to the voters to make the determination.