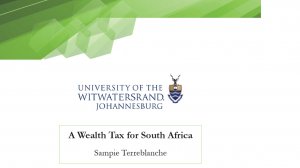 We have great pleasure in publishing our first working paper: A Wealth Tax for South Africa, by Professor Emeritus Sampie Terreblanche. It was exactly twenty years ago that Professor Terreblanche presented his testimony to the Truth and Reconciliation Commission (TRC).

These are followed by a reproduction, in full, of his testimony to the TRC in November 1997, which called for the levying of a wealth tax on all affluent South Africans. Although much has changed since these debates took place, we feel that it is useful to begin our Working Paper series with a reminder of the richness and relevance of these debates to contemporary discussions on “white monopoly capital”.

In his TRC submission, Terreblanche raises the important role that a wealth tax could play in addressing inequality as both a structural and symbolic mechanism, rather than as a revenue-raising tool. In this way, his proposal is quite different from the current discussions on a wealth tax which relate to raising additional revenue for the fiscus.

Many of the structural problems highlighted by Terreblanche persist today, and we believe that there is room for a renewed discussion on the role of a wealth tax in both tackling inequality and effecting structural change in the economy.

Paper by The Southern Centre for Inequality Studies, University of the Witwatersrand

“South Africa (like the rest of the world) needs a structural adjustment that places the realisation of the Constitutional vision of social justice based on equality and human rights at the heart of the economic machine. It needs a structural adjustment that complies with international law, the UN International Covenant on Economic, Social and Cultural Rights in particular, not international finance. One that has the health of nations as its primary objective and which finds profit in ensuring human security and dignity.” - Mark Heywood Paper by CPLO →