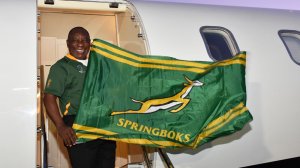 President Cyril Ramaphosa arriving at he 2019 RWC in Japan

The Democratic Alliance (DA) said on Wednesday it would bring a Promotion of Access to Information Act (PAIA) application to force government to publicly disclose the cost of a chartered flight that President Cyril Ramaphosa and an entourage took to the Rugby World Cup (RWC) final in Japan last year.

This follows the refusal by the Minister of Defence and Military Veterans Minister Nosiviwe Mapisa-Nqakula to answer the question posed by the DA, citing security reasons.

DA Shadow Minister of Defence and Military Veterans Kobus Marais said the Minister’s response confirmed that a chartered aircraft was used, and reveals that national government does not want South Africans to know how much they spent on it.

He went on to state that there were individuals on board the aircraft whose presence at the RWC was of questionable necessity, singling out the President’s parliamentary adviser Dr Gerhard Koornhof.

“The actions of government in this regard, and the response by the Minister, demonstrate a callous lack of fiscal responsibility and complete disregard for openness and transparency. This is unacceptable in light of the fact that our national security budget continues to be cut, year after year. A far more ethical choice would have been for President Ramaphosa to have used a commercial airline with his personal security team on board with him,” said Marais.

He said it was concerning that Ramaphosa’s government continued to display the same “disregard for transparency” as government did under former President Jacob Zuma.

“This is why the DA will now bring a PAIA application to force government to disclose the information, which has no security implications and, therefore, should not be confidential,” explained Marais.

He said the DA would continue to protect the rights of South Africans by revealing where public money was spent, and by revealing exactly who benefited from taxpayers' wallets.

Eskom’s new CEO is not overly troubled by the prospect of shareholder intrusion in the State-owned electricity utility, saying that a high level of shareholder scrutiny is to be expected given the current crisis at the organisation. The only way to ensure that the shareholder does not assert its authority, Andre de Ruyter adds, is to deliver results in line with its expectations. “In any business, whether it’s public or private, when the business is not performing, you can expect significantly enhanced shareholder scrutiny – that’s not unusual,” De Ruyter told Engineering News & Mining Weekly in an interview. →